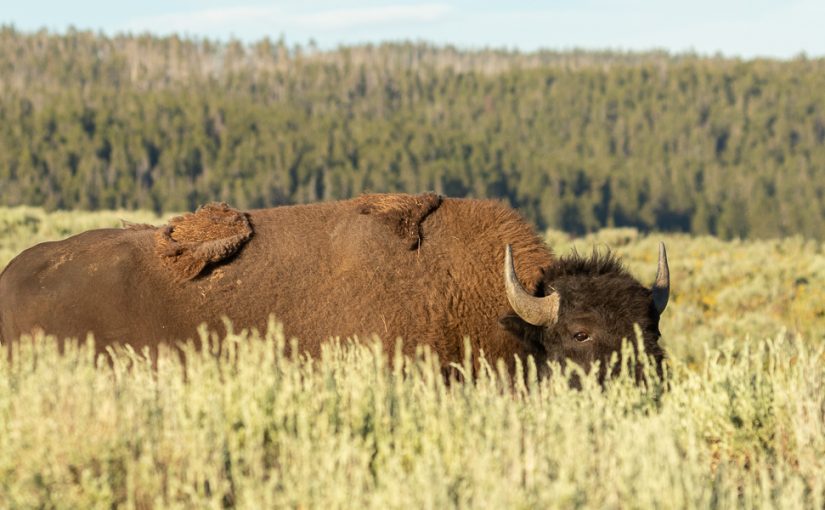 It’s the hottest weekend yet with a surprising amount of wildlife activity for this time of year.

The drive up from work was uneventful and swift. No bear jams in GTNP. The check-in lines at Bridge Bay was pretty long, so I pushed up to Hayden Valley with the possible consequence of making camp in the dark.

Not much was happening; Grizzly Overlook was quiet.

The ranger program at Bridge Bay was super informative. Sometimes the material is repetitive (Yellowstone is a volcano, stay away from bears, erc). But, it’s usually peppered with personal accounts rangers have from spending years in Yellowstone or other parks they have been stationed at. Plus they are passionate about their jobs and the park, and it shows in whatever they choose to speak about.

I was at Grizzly Overlook by 6am, in hopes of finding a wolf…or at least a bear. No luck though. The only reward was some elk that were also around the previous evening.

I gave up around 7:30am and decided to scout the rest of the valley before making some breakfast. Good thing I did, because a once-in-a-lifetime event was unfolding.

The Wapiti’s and at least 10 grizzlies (!!) were were consuming a bison carcass near Elk Antler Creek.

Just so we’re clear, there are only 700 grizzlies in the entire park. 1.5% of them are here competing for this same food.

And it was some of the most intense feeding I’ve seen. Bears were full-on fighting with audible snarls heard 2mi away. The wolves were doing their best to hold their ground, but it was futile. Seemingly out of desperation, the wolves would take bites out of the bears hind legs while they were feeding, in an attempt to lure them away. But nothing worked. Eventually the wolves would bed down and wait.

I wish I had more pictures of this event, but it was too far away. I bushwhacked through the valley a bit, but couldn’t find a closer vantage point while maintaining height advantage. The frequency of bears coming/going made me too nervous to risk meeting one over a ridge or something. Plus remember they are all extremely stressed. So this kept as a scope-only event.

I did take some 600mm video that shows the dynamic of them sharing a carcass. Cast this video to a TV or view it on a large display to see what’s going on.

The activity dies down around 9:30am, and I left and got some food before hiking up Washburn. It’s not closed yet as of this weekend, so this will probably be the only time this year to do it.

The hike was mostly uneventful. After that it’s a brief siesta, shower, and dinner.

Back to the carcass for the evening. Predictably, there is quite the crowed after this morning’s show. The activity was mostly bears with a few wolves making the occasional effort. I hung around until about 8:30.