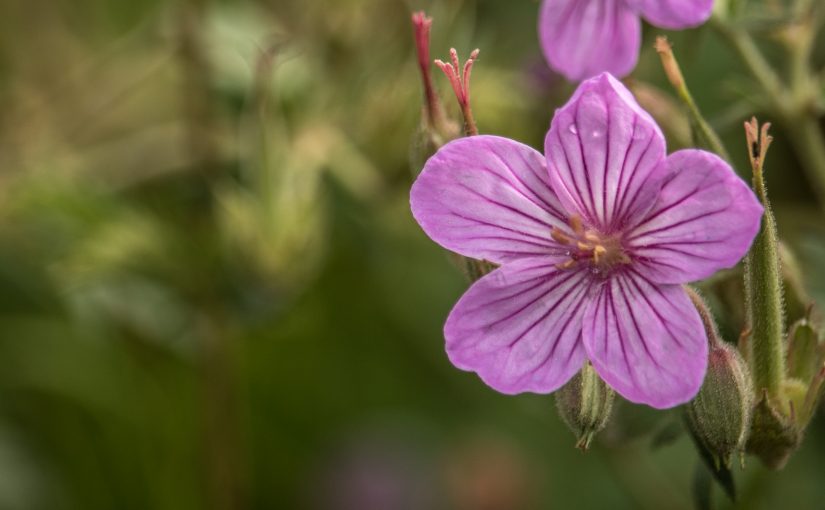 Outa work and hauled up to Bridge Bay from Jackson. I heard about the bison carcass in Hayden Valley, so I wanted to get my bearings on that exact location for the following morning. There was a grizzly on the way to the carcass when I showed up, and I got some cool sunset shots of it swimming the river. It was one of those “sitting in a jam, might as well take a picture” moments, and it turned out to be a good capture.

Location locked in, I headed back to camp. There I had an unfortunate sequence of events that led to my keys being locked in my car. I keep a spare in my wallet, but that was in another pair of pants I changed out of, also in the car. I only mention it because it was a good run-in with the rangers. The ranger in charge of that evening’s ranger program called in a law enforcement ranger to assist. As stupid as I felt through the whole moment, he was super cool about it and got me back in my vehicle. Still, that whole mix-up didn’t get me to bed until midnight.

Not to let the previous evening’s mistake affect the next morning, I was still up and on the road by 5am. There was a grizzly on the carcass at my arrival, but quickly left by 5:30. The lack of sleep didn’t take too long to catch up to me, and I ended up taking a nap in the car, popping one eye open every once in awhile and listening for elevated voices.

After hearing some excited shouting (around 7:30), I almost grudgingly peeked an eye open to see one of the females standing at the top of a ridge. Ok, I’m awake now. Her and 755 came on down the hill and circled around approaching the carcass.

I figured the other female stayed behind to watch the pups, but she also appeared, making it the whole (adult) family having breakfast.

755 always seemed to have that cautious look towards us like he was uncomfortable with our presence a bit…but, food. So he stayed. Animal carcasses are good with attracting wildlife, but usually not that photogenic. So in these moments, I try to focus on getting the shot when they come and leave.

Speaking of leaving, I promised to meet some friends down at Jackson Lake Lodge, so I had to leave when they were still on the carcass. It was hard to leave it with that kind of action, but I later learned that the wolves left shortly after I did.

After an early lunch at the lodge, I headed back up to Hayden Valley. That evening was a bust (for me) in terms of wildlife. I heard that there was an elk calf hunted up near Alum Creek, so the pack was up in that area. By then the traffic was too bad at both carcass locations to mobilize – oh well. It turned out to be an evening of chatter with other wildlife watchers and getting rained on a little.

Back at the carcass before 5:30, there was a grizzly and Wapiti yearling present. The bear was just leaving as we got there, but the wolf hung around for a bit. We drove up a little further to see if that elk calf was still there, but nothing was found. I had a friend from work joining me today, so there were hikes in the plan. We stayed until maybe 7:30 or so, then left for Washburn.

There was a grizzly w/ cub just before the top of the pass, pretty far for pictures.

The hike today was done from Chittendon Rd for optimal wildflowers. They don’t seem to be at their peak just yet. Bighorn sheep were also present at the top. On the way down, we got slammed with a storm. Things went from sunny to 60mph sideways rain in a hurry.

Making it down safely, a lower hike was called for. There was still spotty rain in the area, so we tried Hellroaring. The rain was more gentle, but steady. A black bear was spotted across the way, similar to where I saw one last time I was on this trail. About a half mile from creek, there were very deep rumbles of thunder, but we couldn’t see anything because of the mountains blocking the view. Fearing another big storm, we turned back.

On the way back to camp, we drove Backtail Plateau and saw a black bear w/ 2 cubs a moderate distance away.

No action in Calcite Springs.

Back to the carcass with not that many expectations. It’s a week old at this point. Plus, the fog was intense. I gave it until 7 am and then left for Dunraven for some morning fog shots. Instead, the grizz w/ cub were there in the same spot as the day before. Only this time in wonderful sunrise light, and they came all the way down to the road – my first good grizzly cub shots! 🙂

After that encounter, it was off to breakfast and then to West Yellowstone. The Grizzly & Wolf Discovery Center did a mock campsite inside their bear habitat, which makes for fun pictures to share. 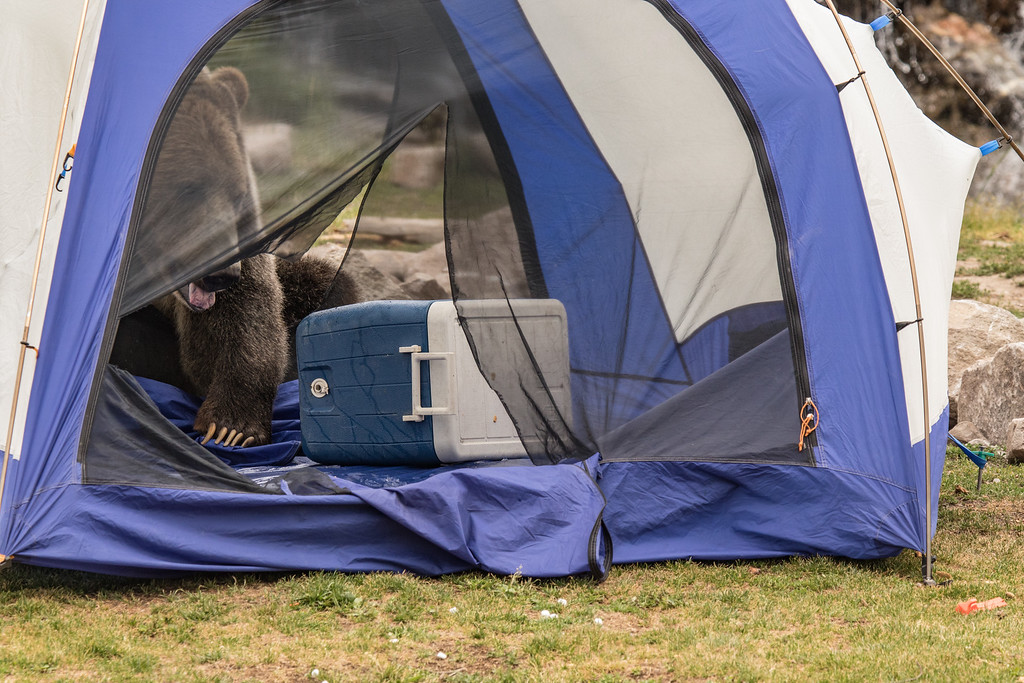 I bet if you’re just skimming the pictures, you stopped here after seeing a grizzly in a tent, which is the idea behind these events. It’s a fun way to raise awareness of safe camping in bear country. After that visit, it was back to Canyon for a shower (really roughing it). On the way out, there was a coyote mousing around.

Not bothering with the carcass this evening, I parked at Grizzly Overlook with the scope. The three pack members were out and about near the tree line, spooking out elk as they moved around. The female yearling then went on a mission south. It was getting to be 8ish, so I decided to mobilize in that direction and then continue back to camp. Some people were thinking that she was headed for the carcass, but she stopped before Trout Creek and bedded in the tall grass. I kept the scope on that spot for people to see, and there were indeed lots of people that wanted to see. You had to watch for at least 30 seconds to see some ears pop up out of the grass. Every once in awhile she would get up, reposition, and bed again.

She had some sort of food cache. I’m pretty sure I saw a leg w/ hoof at one point. Eventually at around 9pm, she left over the hillside.

Got up same time this morning, but it’s to head back to work in Jackson…taking sunrise shots of the Tetons along the way.