Traveled from Victor to Gardiner Saturday. The temps were moderate enough to pitch a tent in Mammoth. 20s at night is about the same as Canyon Village in June.

With the recent warm temps, there is exposed grass in places for bison to graze. It’s last season’s produce, but better than nothing I guess.

That night the wind howled. Mammoth is much less sheltered from the wind than Canyon, Madison, or Bridge Bay tent loops. WIth no thick timber to block the wind, it was quite brutal.

The next day it’s off to Lamar Valley. I made it to just past Specimen trailhead where there were people gathered. There was consistent howling way back by the buffalo ford. It sounded like they were way down low because the it reverberated off the canyon walls. I hung around there for a couple hours and then moved on. Sightings were happening at Slough Creek, but parking was atrocious. Up by Lamar Canyon there were also sightings, including 763M. He was heading down towards the Lamar River bridge, so I hoped a a couple turnouts to get a bit of a closer look, but still far away.

Working back west a bit, there was another wolf pair that was quote chatty. One (or both) were collared, but I forget which ones they were. All I know is they were a black and a gray. I left my car and walked the road for about a 1/2 mile listening to the howling to get a better location. I ended up back at the lookout location from earlier that morning. Problem was that the hillside still blocked the view, and I couldn’t walk any further because they were too close to the road, according to the ranger. I could see people at the next turnout snapping photos, but I could not see what they were taking pictures of. Kind of a bummer. Eventually I was able to catch a ride with a couple nice people back to Specimen trailhead where I saw the black/gray pair. But this turnout was further than the one where I see people taking pictures. By now the rangers have the road shut down to let them cross so everyone is frozen in place waiting to see what they do. In the end they went back up into the trees. It was a scope instead of photo morning, but hearing all the chatter between the wolves was cool.

Moving on I hiked up to Tower Falls. Last year I saw multiple coyotes on the road, but none this time. Although I did see quote large wolf prints on the trail. They would cover the skin tracks at times, and they were well imprinted in the soft snow, so it makes be wonder if they were recent.

After the hike, the usual traffic jam was going on at Slough Creek, but that was about it. I went back to my campsite to bunker down for another windy night.

The next day (Monday), another storm was forecasted to move in. ID-32 gets nasty with snow/wind, so I decided to call it a trip and head out that morning. I had some time to kill in West Yellowstone and it was snowing pretty heavily, so I spent some time taking photos at the Grizzly & Wolf Discovery Center. 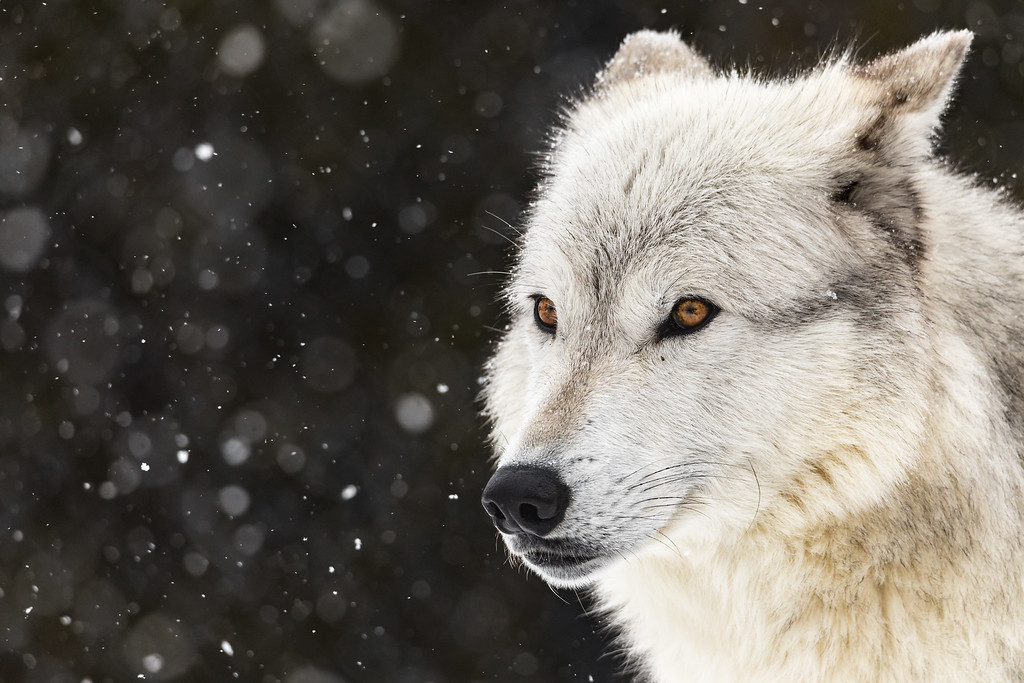 It ended up being rain between Island Park and home.

This next weekend (Fri-Sun) is our self-guided snowmobile trip, staying in West Yellowstone and OF. If anyone is on the interior roads this weekend, say hi if you see a caravan of three sleds with a tow-behind togaban and a “N-CGSAP” banner.