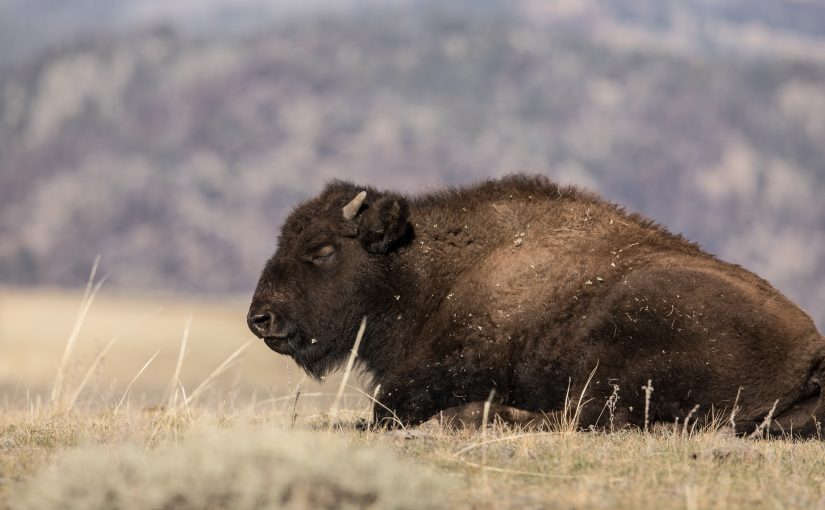 The weather has been so nice this late in the season, I decided to camp the last weekend the south roads were open. I wanted to hike around Lamar Valley on Saturday, so I stayed at Mammoth instead of Lewis Lake, which was also open. Last time I stayed up here was in February. I made it to a site at around 8:30.

Waking up before sunrise is not hard to do this time of year. I made it to the Trout Lake trailhead shortly after sunrise. Nothing in the valley was stopping traffic at the time. Trout Lake was wide open, but the smaller lake to the north was in enough shade to be iced over already. No snow in the rest of the valley.

Heading back west there was a coyote mousing with several successes in this one spot.

Later on it was time to head up to the ridgeline to see what Washburn looks like. The mud was frozen on the way up and very slimy / slippery on the way down once things warmed up.

I’ve had the Rokinon 12mm for a few months now, love the super wide angle, even enough for a selfie! 😀

From this vantage point, I can see all the way to Washburn and Dunraven Pass. The snowline was way above the road…wish it was still open.

Looking back the other way is a view of the burn from the Buffalo Fire.

It was after 3pm by the time I made it back down…only a few hours of daylight left with these shorter days. I wanted to checkout Canyon / Hayden Valley before the sunset and possibly leave out the south entrance.

…but first, there was some bison in decent light. It seems that this young one was soaking up the last of the nice days.

In Canyon, there was a great gray owl perched near the visitor center.

Now it’s 5:30. Hayden Valley is going to have to wait until spring because I wanted to hang around this guy in hops he moves lower, which he did.

Now after 6:30, it’s no use driving through Hayden Valley. After dark, I will encounter less wildlife on the roads when exiting though West and then on the highways in Idaho; faster too.

And that’s a wrap for the season. Winter snowmobile plans exist in late Feb, and I might make the drive up through Bozeman once before spring.