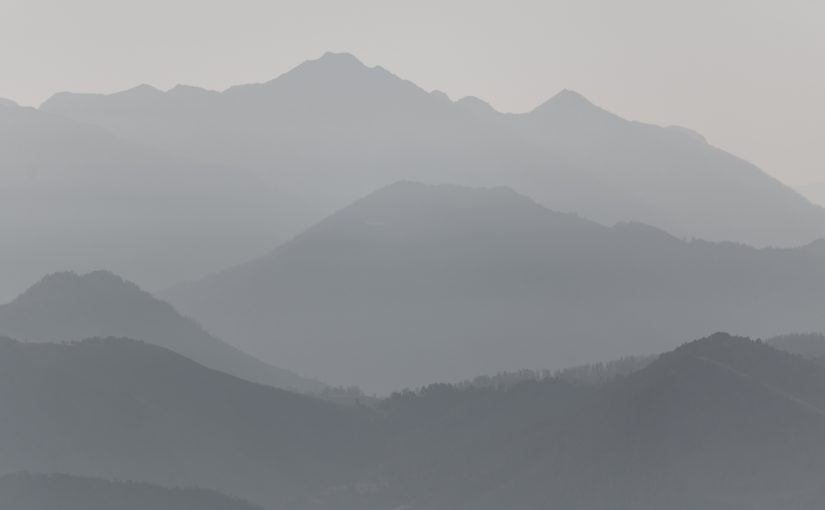 My parents are in town, so it’s a rare occurrence to take the time off work and enjoy a few midweek days in the park.

From Victor, ID, we have the option of the south or west entrances. I like to leave in the morning and go up the south entrance through GTNP because those mountains are scenic from the highway in the morning.

Depending on who is with me, I like to take a short hike in GTNP on the way or take the tram to the top of Rendezvous Mountain. The tram at JHMR is pricy, but a good way to get a great view for not much effort. (As a cheaper option, Grand Targhee and Snow King also offer scenic chairlift rides in the summer.)

It was smoky this morning, but still had decent visibility. I had some fun taking pictures of some paragliding going on. After the tram ride, we went to Teton Thai for lunch (highly recommended) and continued up through Moose-Wilson Road. Nothing too interesting going on there as it was getting to be pretty hot out.

As we approached Hayden Valley, I was searching for this carcass that was reported. It turned out to be way out there and the bears that were present were 80-100% hidden by the tall sage and depressions in the terrain. There was a hilltop behind us that offered a marginally better view. But, as long as the bears were on all fours, they were hardly visible. Other visitors have mentioned that they were aggressive with each other on previous evenings, and I imagine they would have been easier to see then. We stayed there until about 8:00pm and then decided to head to Canyon to make camp.

On our way to camp, we saw a couple elk in the river by Alum Creek. I pulled off to get a better look and saw multiple wolves. Getting out for an even better look, I was able to ID 755m and some others I haven’t seen before. It turned out to be at least two of the pups! One of them was mostly black and the other one dark brown/black…kinda colored like a GSD. We watched them for a while before they moved back into the trees. Now it looks like I’m setting up my tent in the dark. Oh well, still worth it. 🙂 That was the first time I’ve seen any of the pups, and seeing them with 755 was a great sighting.

Everybody was willing to be up at 5am, so we were back in Hayden Valley with plenty of time to spare for the sunrise. We hit the carcass first, but it was more of the same, so back to Grizzly Overlook. Soon we spotted a black wolf way down towards Alum Creek. It was way far to the left, so I walked down the road a bit to find another vantage point, but got distracted by another black wolf heading up the meadow on the west side of the road. Nobody seemed to know what pack he was from. Back at Grizzly Overlook, my dad still had the black wolf in the scope, so we decided to mobilize down to the Alum Creek area. After repositioning, we found a few more in the area. It seemed to be the Wapiti females with pups. I think one Mollie was present because I saw two black wolves walking together where one was definitely bigger, so possibly an adult black (Mollie) and a younger black (Wapiti puppy).

Later on in the morning, we had breakfast in Canyon and then headed north towards Hellroaring Creek for a hike down to the suspension bridge. It was hot with not much wildlife action.

After the hike, we drove through Lamar Valley. Bison and some pronghorn are around with the bison doing their rut activities.

Back in Hayden Valley for the afternoon / evening. The bison seem to be holding attention by force.

By around 8pm, the wolves were out and about from the same area – viewable from the Alum Creek pullouts. I was able to ID 755, females, and assuming the remaining blacks were the pups.

A grizzly also made an appearance from the distant treeline and slowly wandered south.

Before long, 755 was seen trotting away with his tail tucked. He would try to come back to the pups, but the Mollies would run him off again. He then sat at a moderate distance and howled back at the playing pups and other adults. It’s a bit heartbreaking to watch.

Up and out of Canyon at around 5:30. This time the wolves almost waited us out. We were at the Alum Creek pullouts, out in the field until almost 9:00 when they showed up. They were coming in from the south slowly making their way to the north. I was able to ID 755 in the group, so I’m guessing no Mollies were present.

We had to break down camp this morning, so headed back at around 10.

The trip turned out to be a mostly scoping trip with a couple photos. However, I really enjoyed observing the dynamics in the Wapiti pack. Probably something I will continue to check on as the season progresses.