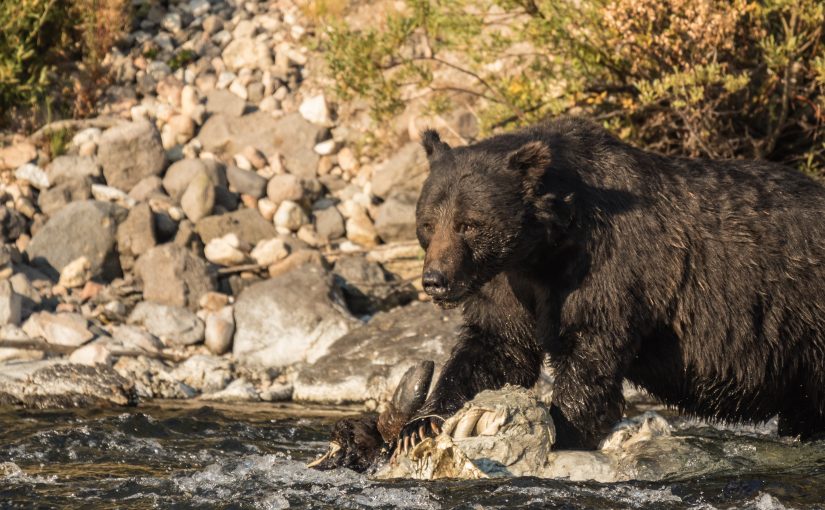 Watching the Maple Fire from a distance, I was curious what it looked like from the roadside, since the map showed it so close. Also that bison carcass at LeHardy Rapids was getting some attention. So, I thought to use up my free Saturday on a quick day trip.

Headed out of Victor by 5am, reaching West Yellowstone by 7am. It turns out that the park service has the turnouts coned off, which was disappointing. It’s not like the fire was right on the road, but I guess they don’t want people hanging around.

So it’s on to Hayden Valley. I stopped to glass at Grizzly Overlook a few times throughout the day with nothing to report. Most of the day was spent down at LeHardy Rapids.

The first shift at LeHardy was until around 10:30am with no action, so I drove up Dunraven Pass. I thought about heading up Washburn, but the fires are just creating a haze at this point.

There was a pretty young black bear taking a snooze and eventually climbed a tree for pine nuts. The second shift at LeHardy was at about 2pm. There were some young bald eagles in the area that seemed pretty protective of their personal space.

The rest of the afternoon was a lot of patient waiting. Andy (Hoggie) showed up and conversation helped pass the time – I may have ran out of patience otherwise. The grizzly bear eventually showed up at 5:30. This bear looked quite old and large, with some possible battle scars on his face.

He left at around 7:30. Looks like it’s going to be a late drive home. On the way out, parts of the fire was visible from the east side of the 7-mile bridge, where there was no river between the fire and the road. Ironically, those turnouts were not coned off.

The glow in the sky is the sunset – the fire on the other side looked basically like what you see here, not a raging inferno.

Grabbed some food on my way out of town and reached home around 11pm – quite a long day. As a sidenote, that newly paved road around Island Park was painful to drive after dark since it has no lines or reflectors yet – very hard on the eyes.