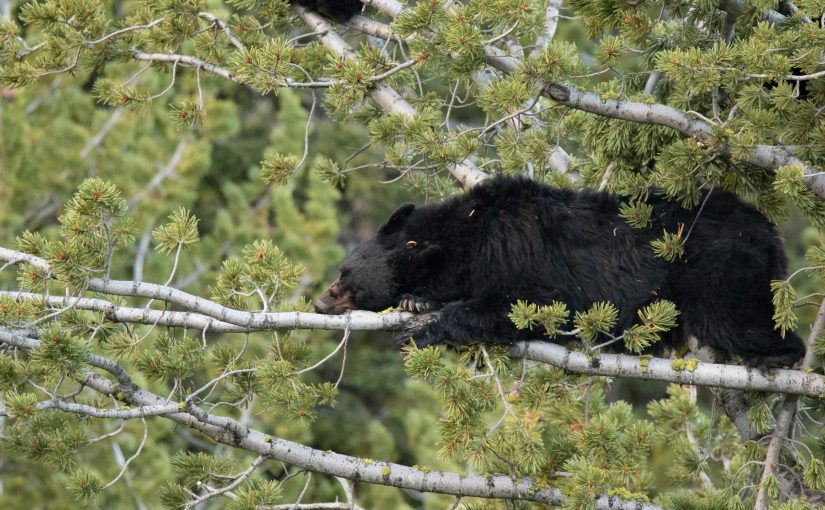 Headed up from Jackson, driving through the burned areas from the Berry Fire. First campsite is in Canyon, and the sun is setting early now. By the time I made it to Mud Volcano, there was already a nice sunset.

I figured Hayden Valley would be fogged in early, so I headed up the pass, forgetting what time of year it is and the later sunrises. Turned out to get some accidental star photos at 5:30am. 🙂

Later on in the morning, it became apparent how many bears were up in the trees. It was a hard decision on where to point the camera at times! Rangers were saying that whitebark pines are producing twice the usual pinecones this year.

Next it’s time for a full breakfast at Canyon. Today’s hike is Avalanche Peak. Last time that hike got foiled when I drove through Hayden Valley because all of the wolf activity that day. Today I was sort of hoping that nothing was going on so I can drive through w/o being tempted to stop, which turned out to be the case.

Arrived and departed on the trailhead shortly after 11am, mostly uneventful to the top. This hike goes from 8500 ~ 10500 ft over 2.5 miles. This summer I have been hiking up Mt Glory about once a week, which is very similar elevation gains, but in only 0.8 miles. I still feel like I could be in better shape, but those weekly hikes have helped.

The loose rock on the upper half of the hike reminds me of the terrain grizzlies use to find moths this time of year. I didn’t see any bears though.

That evening was back in Hayden Valley. For the sunset, I drove up Dunraven partially to see the Central Fire. The smoke was not that bad.

The next morning was spent in Hayden Valley. It was 17 degrees with fog.

Later on after the sun rose, I went further south near Mud Volcano to check on that carcass attracting bear attention. There was a bear sleeping on it the night before, but this morning only had a coyote.

It was time for breakfast, and then up Dunraven where the sure wildlife sightings are.

Today’s hike is Mt Washburn. I’ve done it several times this season, but instead of wildflowers, it’s wildfires to see today. Now, remember all the roadside black bears everywhere. It was in the front of my mind. As I left the trailhead (the Dunraven Pass one), I could see all the bear jams below me as I approached the switchbacks, and I can see the tasty pinecones in the trees along the trail. Seeing the cones up close, they are oozing with what I assume is sweet sap – must look like cake w/ icing to a bear. Hmmm…what are the odds of running into one on this hike?

At the bottom of the switchback, behind a boulder, a bear (guessing a male) was coming straight down the hillside. I didn’t see him until he popped his head from behind the large rock – 25 feet (not yards) in front of me. Four more steps, and I would have run right into him.

He seemed used to people, because he looked at me for a second and then kept walking. Me on the other hand froze in fear and slowly stepped back. Obviously taking a picture was not the first thought, but I got a butt shot after he departed.

Now full of adrenaline, it’s onward and upwards. I reached the firetower and still felt pretty good, so kept on to the next peak. On the return, I stopped at the firetower for the view. Maple, Buffalo, and Central fires were all visible. The Berry Fire was a hazy backdrop to the Central Fire. Also the Maple Fire was huge. The ranger up at the tower said that the size was due to all the controlled burnouts to protect West Yellowstone.

The hike back down was without incident, 8.8 miles total.

Back in Hayden Valley there was smoke way up high, looked like orange clouds. There was also this unknown bird, hopefully someone can help me identify.

Canyon campground closes today. 🙁 Up at 5am to pack up and head for Lamar Valley. There was bison and pronghorn scattered about. The Junction wolves were at the top of a hill for a howling session. It was far enough to require a scope, but close enough to hear them. It was a treat. I went all the way to Barronette Peak and found mountain goats. Nothing else was going on, so I decided to haul back to Canyon and made it in time for the breakfast menu.

After breakfast, it’s a quick check on the Dunraven bears.

Today’s hike was Wolf Lake. It was about as disappointing as Grizzly Lake. 😉 In all seriousness though, it was a nice, scenic view. And I did see a lot of paw prints on the trail. On the way back, the wind really picked up, and the it looked like the Central Fire was blowing up; huge smoke plumes. Getting back to Canyon, I got the alert that south closed from the Berry Fire jumping the highway again.

Hayden Valley was pretty smokey, depending on the current gust of wind.

Hauled over to Madison for the night. Madison junction was a nightmare with all the confused travelers detouring from the south entrance.

A cold numbing rain started in the middle of the night. So I decided to haul over to Canyon after packing up camp to see if the weather was any better. It was, in a way…snow instead of rain.

Excited to see snow in September, I was taking some pictures of the wet snowflakes that were falling, assuming it was going to change to rain shortly. I drove up Dunraven Pass to see if black bears in the snow was a possibility. Problem was that it was full on winter storm at the top.

Visibility was poor with the heavy snow/fog, but they kept the pass open for most of the morning. Probably because the west side of the loop was already closed for construction, and closing the pass leaves no easy detour.

So I didn’t stay up there for long, figuring a ranger might throw me over the side if I started a bear jam in this hazardous weather :D, and they probably aren’t out anyway.

The snow didn’t stop though. It got heavier in Canyon and Hayden Valley, and started to accumulate, up to a foot on the boardwalk between Canyon and Norris (that fire exhibit pullout).

Some of these pictures looks like Jan/Feb, but it’s September! I did a shorter trail around the canyon rim. It was tempting to do something longer, but I was afraid it might change back to a more numbing rain, although it never did.

I exited in West Yellowstone, where it was a rain/snow mix the rest of the day.