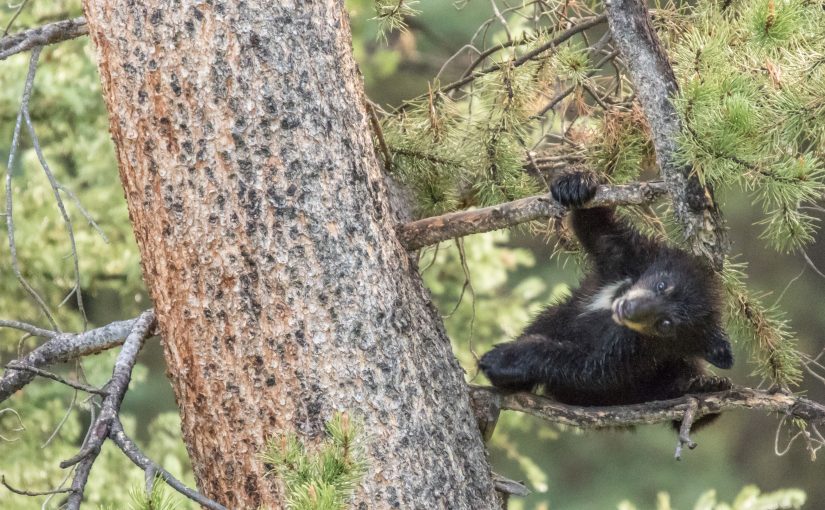 I planned an extra-long weekend in the park – most offices frown on people sneaking a Friday off before a holiday weekend. But hey, it was my b-day Friday so I have a legit reason to not work. 🙂

Drove up from work to make camp in Bridge Bay for a night. It was a pretty steady rain, and I considered just sleeping in the car since I was moving to Canyon the next day anyway. In the end I pitched the tent and slept through the rain (and cold).

I’ve never driven through Sylvan Pass before, so today was as a good a day as any. It was variable weather, transiting between rain, sleet, and huge flakes.

Back to Fishing Bridge and up through Hayden Valley with not much happening at the time. Pushing north, I stopped at a turnout near the top of Dunraven to get some pictures of the variable cloud cover and some bluebirds in the area.

Continuing on, the bear jams were in full force at Tower. There was a mother and cubs at Calcite Springs, and a pair of bears closer to Rainy Lake. The pair would seem to play pretty aggressively. One ranger said it was a mother & older cub. Another said they were a courting pair.

I spent the rest of the afternoon bouncing between the Tower bear jams and Lamar Valley. Lamar had tons of evenly dispersed bison but nothing too exotic. I stopped at the Junction Butte den to check them out. I had a gray and black adult as well as a brief look at a black pup venturing out of the den opening.

Back in Hayden Valley that evening, there was a bison that made me laugh. He stood right on the side of the road, close enough to where anyone would slow down. He wasn’t grazing, and didn’t seem agitated. He would just stand there and watch cars slowly pass by, seemingly amused by them. I sat there for a few minutes watching all the cars slow down, windows roll down, and the tablets/phones/etc come out. “Yellowstone summer in a nutshell I call it.”

Day 2 started out at Calcite Springs. The mother & cubs were out on display near Rainy Lake. There was quite a bit of unsupervised time with the bears that morning, but everyone kept their distance for the most part as Max mentioned in his report.

Next on the agenda for today was a hike from Hellroaring trailhead to the confluence of Hellroaring Creek and Yellowstone River. It’s turning into a favorite spring/fall hike when weather is variable everywhere else.

Right in the beginning of the hike, I saw a black bear and cub walking a trail across the way. She was following a part of the trail that is cut into the hillside and could possibly give an oncoming hiker quite a scare! She eventually walked out of site still following the trail.

Near the creek a sandhill crane swooped in pretty close and didn’t seem to mind me at all. It walked around close enough to get a picture with my hiking 55-250mm lens.

On to the confluence, there were bone piles and such but mostly dry and pleasant. Only got sprinkled on a couple times.

After the hike, I was headed towards Tower at 2:30pm. There was a sizable bear jam, and I thought about not stopping, until I saw the cubs in the tree. There were people on the opposite hillside with the lighting looking good, so I stopped. It turned out to be pretty enjoyable and fun to watch them slowly awake from their groggy nap.

I wandered around a bit more and finished the day watching the sunset on Dunraven Road.

When I’m in my tent at night, I’m usually pondering where to position myself at sunrise. Saturday it was Tower, so today, I figured it was Hayden Valley’s turn. There didn’t seem to be much going on until I stumbled across the clump of cars at Alum Creek. Apparently 755m and possibly his packmates made a kill there the day before. By then it was pretty late in the day, and the heat waves were already having an effect on any pictures and scope viewings.

Moving on to a midday hike, I tried Cascade Lake. It was incredibly marshy, but it didn’t get that way until a couple miles in, and at that point, I’m committed. It started off hopping on logs and rocks to avoid wet feet. The first misstep into the water was inevitable though, and probably good that it happens. Because after that, it just doesn’t matter, and just trudging through the water is way easier.

Came back to the carcass site at around 5pm, and 755 was still on it. It seems that he would eat until he is visibly full, and then leaves to return later. It seems that he has some mouths to feed – I wonder how many?

I still didn’t like the turnout where the group of people were. I walked down the road for a different perspective, and found that I can park on the river maybe 1000 ft north and only have the river bend between me and the carcass. I think it produced marginally crisper images and better scope viewing w/o all the rising heat to go through. I’ll know more about my theory once I get through the pictures.

I was hoping for some bear action like the last time 755 was on a kill, but not that lucky this time. Aside from a swan swimming by, not that much else happened.

First thing in the morning I went back to my spot on the river. 755 was once again chowing down. I hung around until about 8:30, and then my stomach started making decisions for me. I needed a full breakfast after a couple days of energy bars and oatmeal. I headed to Canyon for a quick picture of the falls, and then hit the grill for some eggs, hashbrowns, and bacon.

Then it was back to the northern range. Black bears, etc at Tower. Further north almost towards Hellroaring was a *cinnamon* black bear. Parking the car, I positioned myself with the growing crowd, but he retreated in an island of trees. I was happy to wait him out, so I got comfortable and started reading a book, glancing up every few minutes. It was a pleasant afternoon to just chill and wait. The rangers, however, were not thrilled of that plan. They eventually shoo’d us away so traffic would stop slowing down for nothing. Whatever. That’s the only cinnamon black bear I know of so I was perfectly content waiting for whatever he was doing in those trees and to make another appearance.

More black bears at Tower and then back to Hayden Valley. There was a grizzly w/ 3 cubs near Grizzly Overlook. I only had a minute for a picture and quick scope viewing before they took off. The carcass is a pretty comfortable distance for scope stalking, but not the best for close pictures. That’s ok though.

I went back to my usual spot with no action going on. In fact, I couldn’t even locate the carcass at all. Where did it go? I waited for maybe an hour until I caved and headed up to the turnout where there was a gathering of people. With some help of the other onlookers, I learned that the carcass was in a slightly different spot and harder to see at my more ground-level vantage point. As I was chatting, good ol’ 755 came back out. So I stayed there until about 7:30 when 755 left. No other animals were on it that I saw that evening.

The last evening was spent looking for Grizzlies on Dunraven.

I have to be back at work Tuesday, but I decided to stay in the park another night. I can pack up at 5am, and have an hour to spare on my drive back to Jackson. There was a bear jam, I think near Pacific Creek in GTNP. I seemed to be late to the party though. No worries as I seem to be cutting it close as it was.

The whole energy bar / minimal meal thing was getting to me again, so once I got back to Wilson, the first thing on my mind was a hot breakfast burrito, and boy was it tasty.