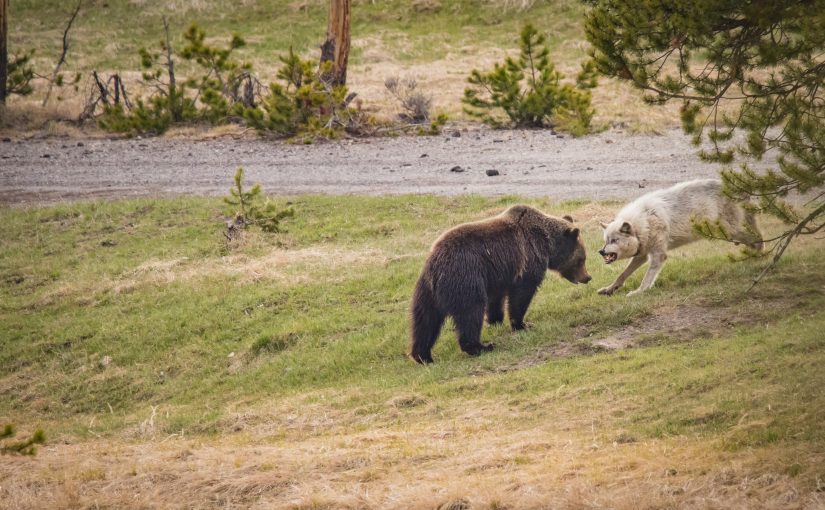 Drove up to Madison Friday evening; no rain this time despite the forecast. It stayed warm too with the cloud cover, 45 degrees at 5:30am.

The goal this weekend is to visit Hayden Valley at its opening. I try to focus on one part of the park when Dunraven is closed. So as tempting as hearing about wildlife activity in Lamar, I stayed put between Canyon and Fishing Bridge.

It turned out not that hard to do this time. When I was passing by the bridge to South Rim Dr (referred to here as “the bridge”), I saw a gray wolf heading south, eventually crossing in front of me. It was too early and dark for any pictures. It’s exciting to see one pass by but didn’t think too much of it. Further down the road, I saw her in the trees, but lost her at the turnout before Otter creek. As I passed over Otter Creek, something caught my eye. Ah, there she is. And a carcass – lovely! This is basically where I spent the day.

Within a few minutes, a second wolf joined in from the other direction. While this was going on, someone in the group spotted a wolf behind us – it was 755! He was walking the ridge above and across the river, heading north.

Within 20 minutes or so, he joined in coming back from the north. It seems that they have been using the bridge to get to/from the carcass…at least when the traffic is light. So they were making this ‘U’ loop around us throughout the day. We would frequently see the wolves up in the treeline above the river making their way to and from the food source.

Expecting another bridge crossing, myself and a few others decided to leave when the wolves left the carcass. I went up to the Wapiti parking lot and waited in the woods. This is important…I positioned myself far enough back for them to cross the bridge and turn north before they got close to me. I’ll be honest, I want a closer shot. But..regulations, and I don’t think they will cross anyway with someone standing at the end of the bridge.

Not everyone shared this thinking, however. A certain individual parked their vehicle on the west side of the bridge, and deployed right at the end, maybe off the the side a few yards. “But Andrew”, you say. “There are no parking signs between the intersection and the bridge!” Well, you are correct. Moving on, the female wolf came out of the woods as predicted, but then retreated back into the woods after making eye contact with said individual. I was pretty flustered at first. But then again, the shots I had already were better than a wolf crossing the bridge. Oh well.

As soon as this onlooker went back to her car, the female did eventually did cross. I was not there at the moment because I heard that 755 went around us and lost a leg of meat he was carrying to a grizzly.

This is where the drama gets interesting. The grizzly was happy to get a free snack, but we noticed that he was sniffing the air a lot, even standing up facing our direction. We figured that he wanted to know where it came from. The bear eventually disappeared into the woods.

Back at the carcass, I was chatting with a couple other people about this theory. As we were talking, the grizzly was seen sitting at the top of the ridge looking right through us to the carcass. Smart bear.

As he paced across the ridge looking for a place to slide down and cross the river, quite a few people showed up and lined the riverbank. It became pretty clear that the number of people were affecting his behavior. A few people commented on how the poor bear can’t avoid the people. My response is “Ok, you leave first.” It sounds harsh, but the truth is everyone wants to be there but don’t want the crowd. The ranger seemed to handle it quite well though. He parted the crowd right north of the Otter Creek bridge, where the bear was looking. I’ve seen this work with other bears, but this guy seemed skittish or something else was deterring him. He would pace back and forth across the top looking our direction.

Remember, the wolves like this ridge as well. It seems that they didn’t like a grizzly hanging out in their area. Or maybe they were annoyed that he ate 755’s stash, probably meant for a denning mother or pups. Either way, they would charge him out of the tree line on three separate occasions. After each interaction, the bear became increasingly more frustrated. I noted the yawning, stomping, clapping of the teeth, and the very audible snarling. He was mad that the wolves were pushing him out, and I was a bit nervous he might cross in this pissy mood and not take to the crowd kindly. Didn’t matter though because he followed the river bank north and disappeared.

I took this time make sure nothing else was going on. I drove to Fishing Bridge and back, assured I wasn’t missing something.  This time of year had harlequin ducks out at LeHardy Rapids.

Then I had breakfast/lunch, dumped my memory cards, and got some reading done until about 5:30.

Then the grizzly returned. He came up the river from the north, occasionally making a pit stop to eat some dead fish thawed out on the riverbank.

The crowds were thinner this time, so the bear made it across and to the carcass.

When he made it to the carcass, he was looking over his shoulder quite a bit. If their pattern continued, it was only a matter of time until the wolves showed up. Sure enough, 755 came charging in quite aggressively and startled the bear off the carcass.  Not wanting to give it up, a conflict ensued.

They were pretty evenly matched. 755 would eat for a minute before being driven off by the bear, and vise versa. Eventually, they would eat together until one gets frustrated and drive the other one off. The bear eventually lost interest and 755 finished eating and left at his own will. The bear seemed young and inexperienced – almost having a “this is a bad idea” like in the above photo.

But there were times where they would eat together.

I left with 755, hoping for the whole bridge thing again, but no success. At that time, the sun was set, and it was time to head back to camp.

Throughout the day I switched over to some video.  Here is a cut from that day.  Extended version also available.