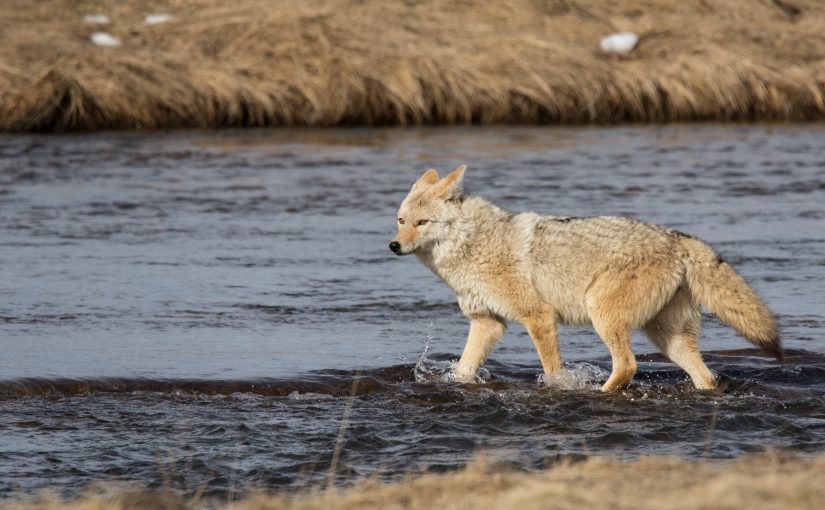 This Friday I had an opportunity to join Max and other photographers to look for bobcats. Thanks Max for letting a rookie in the group. 🙂

Left home at about 4:30am to head to West Yellowstone. The objective was to see a bobcat, presumably along Madison River. If you already read Max’s trip report on the day, then you know that we were not successful on that front. Oh well. It was still enjoyable spending the day with like-minded people I haven’t met before.

What is present in the park through are coyotes – seemingly at every turn. Here is a couple up near Gibbon River.

There was an old elk carcass on Madison River that we checked on several times that day. In the afternoon there were three coyotes that approached it ever so cautiously.

The day was also peppered with bald eagles and other bird sightings.

On day 2, I left West Yellowstone for Gardiner/Mammoth. Living south of the park, this is the first time I made this drive – quite scenic.

I will be staying at the Mammoth CG for the next two nights. I figured that the low was only in the 20s and way cheaper than hotel rooms.

I didn’t get to the park until about lunch time. I drove through to Barronette Peak with nothing interesting. In the afternoon, I snowshoed to Trout Lake – uneventful.

Drove back to the campground and took some long exposures while dinner heated up.

I wanted to be in Lamar Valley at sunrise, so I headed out at about 6:30. There was a fox wondering the field by Hellroaring…but, dark.

Near Druid, there were a couple moose out at the meadows. It’s an interesting sighting for me because this is my first moose sighting within Yellowstone. Everyone seemed to have their opinion on whether they were two calves, a mother and a calf, etc. I could see nubs on both their heads, so my vote is that they are both males with dropped racks.

Moving on, you’ll never guess what I saw…

There were some people clustered around some bighorn sheep. The weather made for some unique images.

Later it was time to take a hike. I did the pretty popular walk from Tower Junction to Tower Falls. The road was groomed and the snowshoes were probably superfluous, but I used them anyway.

There were a few wildlife encounters of the common kind along the way. Their fear of people seems to be on the low side when they trailed us walking directly in the ski trail.

Tower Falls itself is cool in the winter. I have not seen it in the summer so I guess I have no comparison though.

On the way back, there was another coyote following the same path as the previous. This one has noticeably different marking on it’s nose.

Even after leaving the road, he seems to enjoy hanging close.

At this point I’m almost suspecting they have gotten food rewards in the past or something.

Up at 6:30 again and over to Lamar Valley. There was a fox at the Yellowstone Picnic area. I setup my tripod and was barely prepared for what he did next.

I almost wanted to cheer the little guy on for hearing the mouse under the snow and successfully dive bombing it. What a catch! The only way it could have been better would be if he waited until after sunrise and let me use something lower than ISO-3200. 🙂

After that I drove the length of Lamar Valley and had a Max sighting, but nothing otherwise. I had to drive home to Victor that day, so decide to head towards Gardiner – of course running into one last coyote along the way.