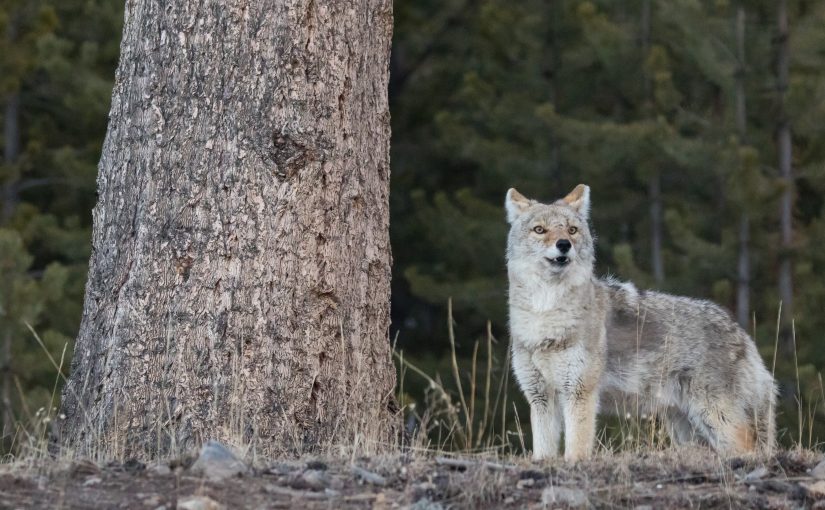 I was super excited for this trip, first one with my 7D II and Tamron 150-600 :D. Since only commercial tours are allowed in the winter, I figured I’d go all out and do a photo workshop with an area photographer. It really was a great time going in with other people learning and enjoying photography.

On Feb 18, Yellowstone announced that they are going to start plowing between West Yellowstone and Old Faithful due to poor snow conditions. This changed our plans slightly, and actually for the better.

Entered at West Yellowstone, and not 20 minutes later, spotted a pack of wolves crossing the Madison river. It was pre-sunrise and they were quite far away. In the other pictures, I could tell that this wolf was collared. Wonder which one? Here he looks like he’s trying to hide from us. Not successfully 🙂

We explored the geyser basins, where some animal tracks were the most interesting for me.

Continued to Old Faithful, watched it, ate lunch, etc. Then as we were pulling out, the guide goes “BEEHIVE BEEHIVE BEEHIVE” and races back to the parking lot. I’ve been through the geyser basins a few times, but it’s the first time I saw this one go off. It’s a good day when something happens to get your guide excited. 🙂

After that we started working back towards West Yellowstone. There has been a bobcat hanging out at Madison River, but we never saw it. Oh well. There was at least a Blue Heron in the fading light.

Our original plan was to spend most of the day at Norris, however, because of the plowed roads, we were able to cover ground faster between West Yellowstone and Madison. Then we transitioned to snow vehicles and hauled all the way to Fishing Bridge. The bear sightings at Mud Volcano was also motivation to haul all the way over there.

This was the snow vehicle we traveled in: Seeing the Canyon Village area was one of my favorite highlights of the trip. It’s my favorite hub for camping, eating, etc during the summer, so it was really cool to see in the winter.

Heading towards Hayden Valley, there were river otters in Yellowstone River, near that bridge to Lower Falls. River otters against snow was the hardest ever to shoot. My camera seemed to have trouble focusing and nailing the exposure was challenging.

Closer to the Mud Volcano area, our guide wanted to stop at this lonely tree, and it turned out to be a nifty landscape shot. I’m going to do a better B&W version of this one eventually.

We never did see any bears at Mud Volcano, just a bunch of coyotes, including one near almost 5 bison carcasses in the river. We saw I think a total of four foxes in the Hayden Valley area, but most of them were pretty far away. This was my relatively best shot.

Heading back north, this beaver was found in Yellowstone River. It was very cooperative, even showing us their tail.

Almost back to West Yellowstone, this is a cool stretch of road. Took a shot of the other bombardier in the group.