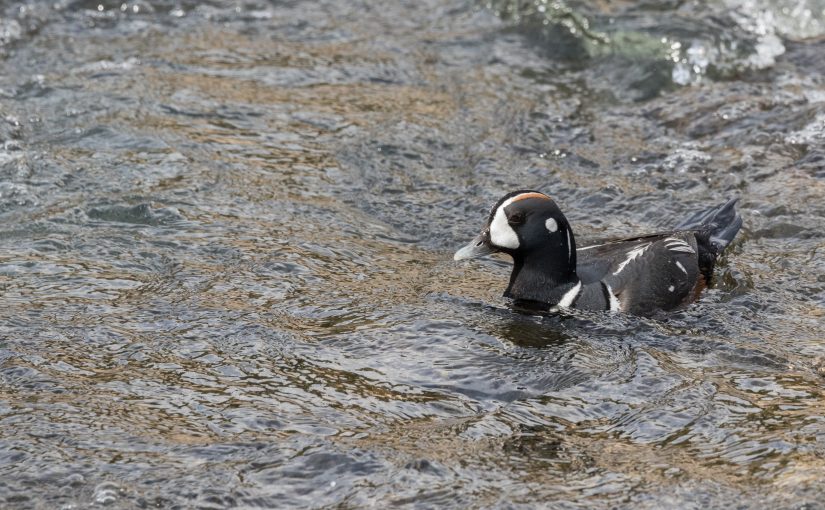 Had some good bear and wolf sightings this past Saturday in Hayden Valley. Camped in Madison Friday and Saturday night.

Scouted the riverside on my way in Friday night and found only bison…but the full moon was cool.

Saturday the focus was on Hayden Valley and the surrounding area. It seemed like this was turning into a birding trip. For the morning, I had harlequin ducks at LeHardy Rapids, herons on the river and area creeks, and hawks.

The heron had a small story. I saw it in the river, and another photographer was shooting it through the drainage tunnel under the road. So he was on one side of the road at the river level, and the bird on the other. After he left, I replicated his technique to get that shot.

Around lunchtime, a bear was spotted heading north from Mud Volcano – a grizzly. Some area onlookers said she was a 4-year-old female. It seemed a bit juvenile the way it trotted along, so I’ll believe the age. The developing bear jam was very manageable. The bear walked a short distance from the road while the cars waited for the bear to pass, leapfrog in front of the other cars, get off the road and wait for the bear to approach, and repeat.

She was followed for miles before stopping to rest on a patch of snow.

I made some various other stops throughout the day, and the bear paparazzi remained all afternoon. I came back later in the afternoon where rangers were managing the traffic with the bear munching away off the roadside. She crossed once to get a drink and then went back to the hillside. The facial expression in this photo says “I’m a star and I know it.”

I left headed for Canyon when a group of people spotted a wolf at Alum Creek just on the opposite side of the river. It was headed south, so I left for the turnout just north of Grizzly Overlook. I walked in on foot to the ridge overlooking the river. Got a decent view, but he turned around and headed north again.

Yup it’s collared. Not sure which one. Canyon pack? Why alone?

So I went back to Alum Creek, but the wolf never showed up…must have turned around again. Went all the way to Grizzly Overlook, scoped the valley…nothing. Went one turnout north and hiked in a bit towards the river where I saw him last…nothing. Was about to call it a night when I noticed people looking intently from Grizzly Overlook. Figured I’d check again. Yup, the wolf is following the river in front of the overlook.

Watched him until he passed out of sight to the south. I figured if he doesn’t do any more of those “turning around while I’m not looking” tricks, I can follow the river south for another view. And that’s exactly what happened.

I hopped turnouts all the way to where the grizzly was still chilling on the hillside. There were a couple times where he would go into a stalking mode and then lay down next to the river. He was intently watching a beaver or something swim by.

I continued to watch after the light faded. He eventually left the riverside on a bend and disappeared behind the hillside.

Headed back home Sunday morning, snapping this photo on my way out.