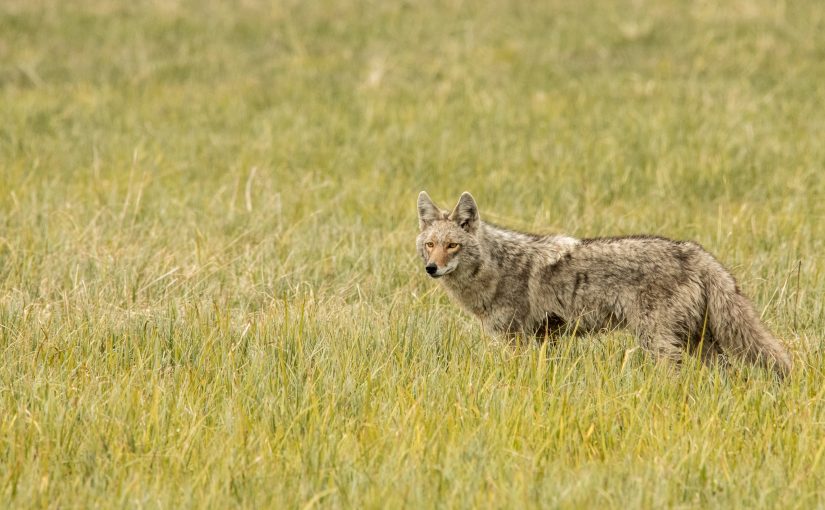 I should note that even in late May, having adequate snow tires was helpful. On the way up, I was caught in a thundersnow storm where several inches of frozen precip piled up on the road quite quickly.

Started the day off driving towards Mary Bay. The most interesting spotting in that area was a red pickup with a YNet magnet. Which of you was that? 🙂 There was a coyote hunting in the field pretty far out. No bear management signs in sight, so I walked out maybe a half mile for a better view.

On my way back to the main road, there was a grizzly sow and two cubs…guessing the same one that’s been in the area. But, they were pretty far out.

Continued through Dunraven Pass and up to Lamar Valley. Pronghorn were everywhere. There were also bighorn sheep near the picnic area.

At Slough Creek, there was a mother black bear with two very light cinnamon cubs – quite the impossible camera metering challenge!

Headed west towards Black Plateau Drive. There was a very patient pair of male elk with nice velvet antlers that were growing in strong. Backtracked to Hellroaring Trailhead. I think this was a grouse on the trail.

I went around the rock area listening for pika. I heard some but never saw any. Instead a herd of deer wandered right around me. Love those giant ears!

Leaving Hellroaring, there was a bear jam just north/west of Petrified Tree. Black bear mother w/ cubs. They were pretty far off the north side of the road.

Moving on to Lamar Valley, I saw a bluebird on the side of the road. I like getting bluebird pics, because they look so unique in the landscape. This one was quite cooperative and held still long enough.

Heading back to camp, I stopped at Tower Fall campground, that one-way road. A black bear mother with a black and cinnamon cub were between the one-way road and the main road. The rangers were trying to get them away. They cocked their firearm that contained a cracker round, and that was enough for her to move away. I didn’t hear them fire it that time.

In Hayden Valley, it was getting near sunset. There was a grizzly wandering just the opposite side of the road from grizzly overlook, but it was getting quite dark. I like this silhouette picture of the visitors watching the bear rather than the bear itself.

Left from Bridge Bay north towards whatever stopped me first. No sightings at Tower until Calcite Springs. This was the best bear sighting of the weekend. There was a mother black bear with two cubs (black and cinnamon) up in a tree just east of the parking lot. She kept on nudging the black cub up higher and higher. If this was a tree climbing lesson, it did come in handy moments later. The mother eventually came down, which made me a little skittish because people were circled around the tree a bit, and I didn’t want her to feel cornered. But she stayed at the base of the tree eating vegetation. By then a ranger showed up. He backed people up, but not far. The cubs eventually descended from the tree. After a brief moment, she decided to cross the road south of the parking lot, sending that group of watchers scattering.

So now they were grazing and wandering on the west side of the road, and we followed on the east side. It made for some very nice morning sunlight pictures.

Their morning breakfast was interrupted by a male bear entering the scene. As mother perked up, the cubs scampered up the nearest tree amazingly quick. She would charge at him until he backed off, but he would not leave. She eventually chased him almost all the way back to the parking lot – maybe 50-75 yards. At that point, he left her and the cubs alone, and decided to pick on the ranger instead.

Bad move. Reinforcements showed up in the way of a paintball gun, and they did have to open fire. The clever guy did not immediately run like I would think. He clawed onto the nearest tree and used it to hide from the line of fire…maybe he’s been through this before? He eventually took enough hits to have to flee. During the firing, they were shouting “hey bear!”, seemly so he associates that with the coming shots.

During most of this drama, the camera was set aside. There was too much action to focus on capturing it. I’ve heard of a mother bear defending her cubs from a male bear, but never seen it played out in front me.

After this the mother and cubs drifted further south and into thicker trees.

Since there was little rain in sight, I headed towards Hellroaring Creek Trailhead and hiked maybe 3 miles in. Nothing too interesting…a duck here…a bird there.

Drifting back south, the same mother and cubs were putting on a show at Calcite Springs again. When I got there, I learned that a male bear showed up again. I’m not sure if it was the same one from that morning. Anyways, I was standing west of the parking lot on that hillside, and she was across the road and down a ways. While we were talking amongst ourselves, the male bear creeped around us and trotted right through the parking lot. I give the rangers a lot of credit for dealing with the traffic jam and then handling male bear walking right through the crowd. I did not follow. He eventually crossed the road heading south, and the sound of a cracker round hurried him along.

Out of packed sandwiches, I decided to head to Canyon for a hot meal. This was when I hit the largest bison jam ever. It took two hours to get through Dunraven Pass. A small heard of maybe six bison decided to get on the road and to their defense, had nowhere to get off to graze. So they followed the road for miles. I got to Canyon at 6:20. The restaurants and shops closed at 6:00. It was tail mix and granola bars for dinner that night. Oh well.

I drove around Hayden Valley and the east road to Mary Bay that evening with nothing interesting.

Headed up through Hayden Valley early in the morning. There was a grizzly at Alum Creek grazing through the fog.

Did some driving around up to Tower Junction and then back through to Mary Bay with nothing interesting. Started heading for home through the south entrance. There was a cluster of cars at Oxbow Bend. Apparently there was a grizzly sow w/ cubs hiding in the sage. I was too tired to wait them out. Figured I used up my bear luck for the weekend already.