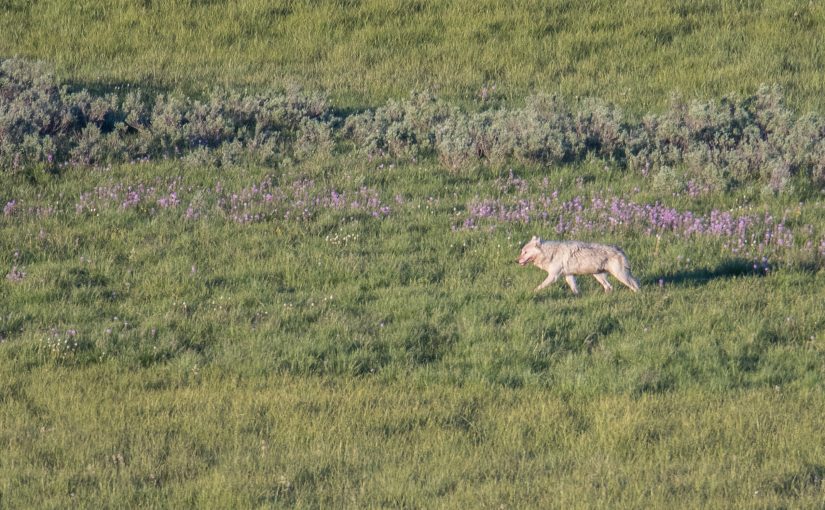 With the snowfall from early June a distant memory, this was one of the nicest weekends so far this year.  It’s warm summer weather with wildflowers down in the valleys.

But don’t let the warm afternoons fool you…the temps are still around 30 degrees in the morning.

Friday’s route is up from Jackson through the south entrance.  There was a jam in 399’s area, but I couldn’t see anything close, so I pressed on.  When approaching a traffic jam in wildlife hot spots, I can usually tell the status by watching the people.  They were chatting with each other with few focused on their cameras/scopes/binocs.  So I probably just missed them – oh well.

Made camp @ Bridge Bay and spent the evening near Mary Bay.

The morning was spent in Hayden Valley. It was foggy, but not bad.

Grizzly Overlook was the first stop. A quick scan to make sure all the dots were bison (and not a bear), then I moved on to Alum creek. While there, the Wapiti wolves came out from their typical rendezvous site. They spooked a herd of elk into the river and gave chase to a couple. Unsuccessful, they moved out of site, so I moved back to Grizzly Overlook where they were visible for the rest of the morning. Scoping distance through, so no photos.

There was also a grizzly sow w/ 2 cubs in the opposite direction, so an active morning.

Then it was breakfast time and up to Mt Washburn. I’m going all-out with the camera gear and taking the 150-600mm lens in hopes of bighorn sheep being at the top. No such luck through. Instead there was more snow on the trail than expected.

It was the deepest at the switchbacks where there is some protection from the trees. There was enough over-snow travel to roast my face even while wearing a hat. Must have been the sunlight reflecting off the snow.

Making it to the top, it’s now midday. Landscape photos will usually be really hazy. But, you can cheat a little bit with a polarizing filter. In this view from the top, there are other hikers for scale at the lower-left, where you can also see the trail crossing over one of the many snowfields.

After the fire tower, I went a bit further north looking for bighorn sheep, but they were way further down the other side. I’ll get them next time. Now it’s time to head back down.

Waking up before sunrise (4:30am) and staying up past sunset (10:00pm) in June is hard. Most wildlife will lay low in the afternoon heat, so I’ll make like a wolf and also take an afternoon siesta.

Later in Hayden Valley, the bison jams were in full swing. It’s a good time to pull over and eat my sandwich. People watching is a favorite pastime while waiting for the light to become more photogenic.

Now at Grizzly Overlook, there were some regulars that filled me in on the day. The Wapitis hung around long after I left this morning, chasing some more elk occasionally. They took off when hikers entered the area. The area is currently open to hiking, but may close soon if the wolves settle in.

While we were still chatting, another set of hikers show up and wonder through the rendezvous area. Usually the wolves back away and don’t show up the rest of the day when people are present out there.

But today, they showed up anyway. The 2yr female (1091F) was the first to make an appearance. She mostly lurked in the shadows of the treeline and soon disappeared. It’s hard to tell with the photo, but when looking though a scope, she clearly has a cache of food in her mouth.

Later on a couple black wolves (probably the males) showed up and took a similar path.

Finally as the sun got lower, the alpha female showed up. She took a more unusual path and ended up crossing the river in front of us.

…which is interesting. As soon as she went for the river, I figured that she is not going to the same rendezvous area unless she was going to swim the river twice…unlikely. That means she’s going to trend west, which means crossing the road. After the river crossing, I went up to the hilltop where the whole valley is visible. When getting to the top of the hill, I point my scope at…any group of people I can find. Where are the people looking? West. She crossed the road before I could relocate. All I get is a wolf butt at scoping distance.

Her direction of travel is interesting. It’s believed that both her and the other female had pups this year. They are also all returning to the valley this evening with visibly full bellies; one of them also carrying spare meat in their mouth. So when both females followed similar paths and then parted ways, I would assume that they are both going to feed their own pups. The alpha female heading west makes me think that her den / rendezvous area might be back beyond the power poles, maybe that western treeline somewhere?

The next day (Sunday) was an early departure towards Jackson. Bear 399 and her cubs were out at the usual spot near Pilgrim Creek. One of these days I should plan more time at this location since she seems to be here consistently, but today is not the day. So here is just a pre-sunrise shot (her cubs were hiding in the sagebrush).