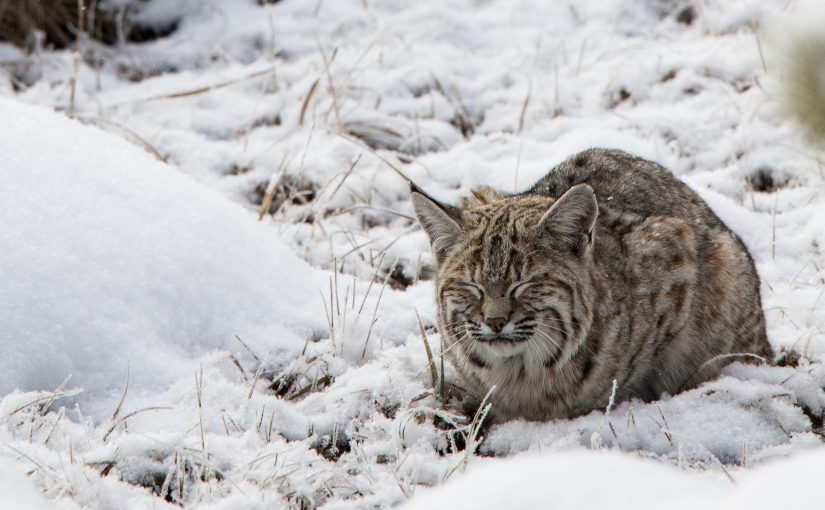 My coworker scored a permit through the self-guided tour lottery system. We have had route sketches on the marker board in the office for several weeks hashing out possible routes and plans.

This group is pretty diverse and had different objectives on the trip. A few us are big into backcountry skiing, while others are biologists into animal tracking, photographers, etc. I think we did a pretty good job at planning activities around all our wants for the trip.

This trip requires much more logistics and planning than my usual weekend getaways. The day before (Thursday), we loaded the sled trailer, rented our other gear (like helmets, suits, etc), and got the food supplies together. The group is a total of seven people on four sleds with one of them towing a trailer for supplies and gear.

I was up at 5:00 with enough time to get ready, load up my car, and head over to Jackson to meet the rest of the group by 7:00. From there, we picked up breakfast, lunch for the first day, and headed up to Flagg Ranch. At Flagg Ranch, we parked the vehicles, unloaded the sleds, loaded up the gear, packed the trailer, bundled up, and secured the vehicles.

The permit was picked up at the backcountry office, right at the south gate. We had a meeting with the rangers to discuss our plans and make sure all the paperwork is in order.

Finally, at like 10:30, we are ready to enter the park. The forecast for the day was cloudy with snow. It looked like the unpredictability of Yellowstone’s weather worked in our favor today.

The first wildlife encounter was near West Thumb, where there were a couple bison on the groomed road. I mention this mainly because there is a distinct difference when touring the park on a sled – you are exposed to the weather wildlife, etc. There is no shelter in your vehicle. I used to creep by bear jams, bison jams, whatever in the summer without a second thought, but it’s not the case in this scenario. I imagine summer motorcyclists feel the same way.

The next stop was Mud Volcano, where we probably had the most photogenic bison of the trip. The camera didn’t nail the focus on his face, probably because of the steam, but scaled down a bit, I like how it looks.

Moving on to Hayden Valley, I was hoping to see a fox, but unfortunately had no luck. This section was largely uneventful.

Next stop was Lower Falls, can’t resist stopping there for a picture. By then, the weather has closed in a bit. We stopped at Canyon to make use of the heated restroom. The sun was setting, so it was time to put on all the layers. We then hauled across to Norris Junction and then north towards Mammoth. The clouds broke just long enough to see part of the sunset.

As we got closer to Mammoth, we realized that the groomed road ended a few miles from the hotel – slight problem. It was about 6:30 when we got to this point. The map shows full services for Mammoth (gas, food, warming hut), and the rangers knew our plan to travel to Mammoth by sled. I assumed that the developed area was a “transition town” of sorts where both snow and wheeled vehicles had access. The map showed fuel, and warming area because there is a makeshift fuel station and warming hut outside of town, not the fuel station in Mammoth I was expecting.

So now we are stranded with a potential hike with all our gear. Thankfully, there was a commercial tour group that was being picked up when we were pondering our situation, and we were able to bum a ride with them.

Why would the park service not leave the road groomed all the way to town, and then transition to plowed roads for the North and NE entrance? At the time is was a frustrating moment because the map was misleading. But on the other hand, the self-guided program is new. The park is probably used to dealing with seasoned guides that know this stuff. Still, I will be contacting them to hopefully make the map more clear so people know you can’t actually access Mammoth by winter travel. 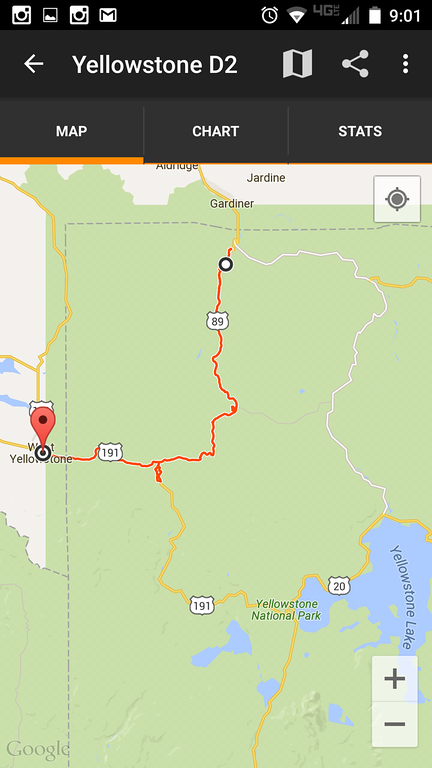 Now familiar with the shuttle process, we hopped on the 7:45am shuttle from the hotel to the barricade south of town, packed our gear up and hit the road. The first stop was close by, Bunsen Peak. Part of the group wanted to ski this side:

The other part of the group went snowshoeing on the lookout for animal tracks. I split off solo to spot the skier group and be on-hand in case something went wrong. All of us maintained radio contact.

Everyone made it down safely, and I had some time to kill while they hiked back to the Bunsen Peak trailhead. I hung around Swan Lake Flats looking for wildlife, but was limited to this poor bison. It was a little depressing to watch him break through the snow in the meadow. He would take a few steps, rest, and repeat.

Soon after we reunited. The snowshoe group had many tracks to report, but no live sightings other than squirrels. In my free time waiting, I got out my GoPro, and was searching for a place to mount it. I could make a whole album of “is it recording?” pictures. 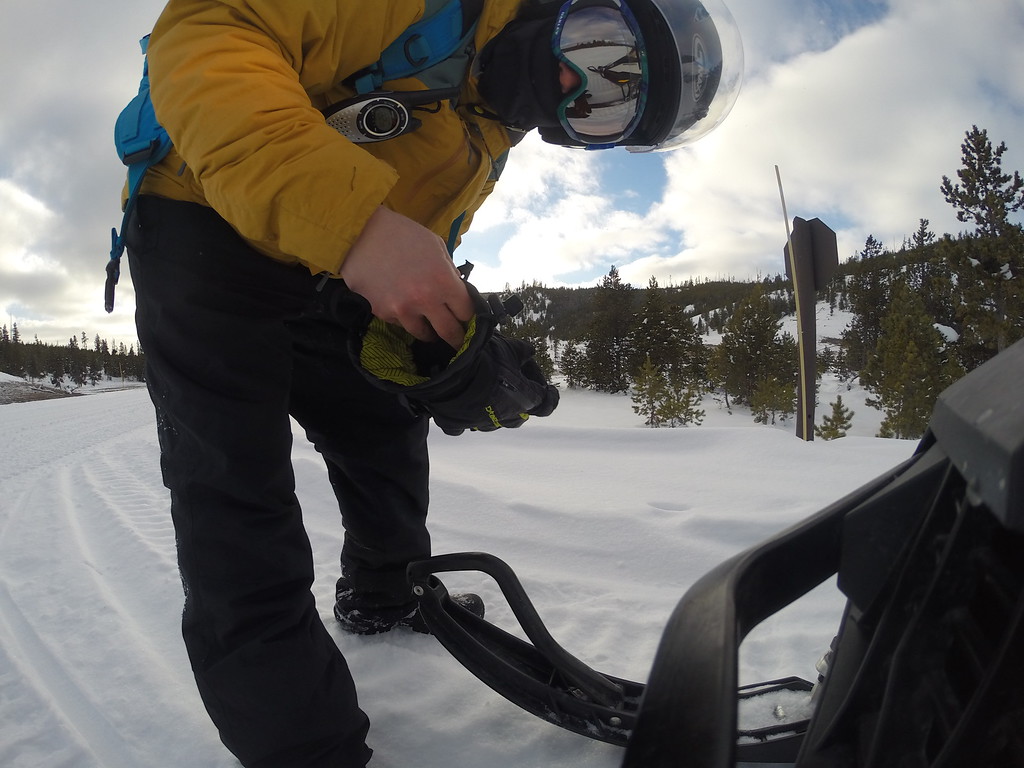 We continued to push south, stopping at Gibbon Falls and Norris Geyser Basin.

As the sun set on day 2, we made frequent stops near the 7-mile bridge so the ski clique could do a bit of line spotting. I also was keeping my eye open for that elusive bobcat I heard about last year.

As it was getting dark, we reached the the west gate, and was checked into our rooms at Three Bear Lodge like 15 minutes later…hardly the fiasco from the night before. And this hotel is outside the park! Go figure.

Day 3 was my favorite. I think we made it into the park at around 9am or so. We stopped along Riverside Drive (which I was surprised they groom it) looking for wolves, etc. No luck. Bison were a plenty though. All shots with the sled ski in-frame are with a GoPro. Don’t let the perceived bison distance fool you, we were sharing the road at some points.

Continuing on, I pulled off at the Mt Haynes overlook since it looked particularly photogenic in the morning light.

When the rest of the group pulled in, we decided to take our group shot here. As we were packing up, a group member called out something walking away from the river. Wolf / coyote? Too small. Fox!? Nope. Turned out to be our elusive bobcat!

People in the group thinks it’s a she because of the size. She made her way towards us and the road until bunkering down waiting for us to leave, at which point she crossed the road and headed up the hillside to the north.

Shortly after that, there was coyote #1.

We moved on the Madison Junction. The ski clique decided to ski Purple Mountain, and the rest of us headed towards Fairy Falls trailhead for some snowshoeing.

After that, we headed towards Old Faithful. On our way, we spotted coyote #2. Closer to Old Faithful, coyote #3 and a bald eagle were spotted, although I do not have pictures of those encounters.

Arriving at Old Faithful within a minute of the scheduled eruption, we rushed over to the observation area. It was about 15 minutes late, so we had plenty of time.

After that we warmed up in the snow lodge for a bit, and then headed back out hoping to catch the eruption again in the sunset. This time, it was 15 minutes EARLY, so it erupted while we were in the back loop. It would have been perfect lighting…oh well.

After that we had a nice warm dinner at the lodge. Then we layered up for the haul back to Flagg Ranch.

The haul back was cold. I had plenty of layers on, but my goggles kept icing over, so I had to stop a couple times to thaw them out. Otherwise, it was a peaceful ride back with only a couple groomers to share the road with. We were through the south gate at around 8:30.

From there we loaded the sleds up, pack everyone’s stuff back in cars, and began the drive back to Jackson. There we fueled up the sleds, dropped the trailer off at the rental place, picked up my car, and headed home. I was back in Victor by midnight, ready to begin a long workweek.