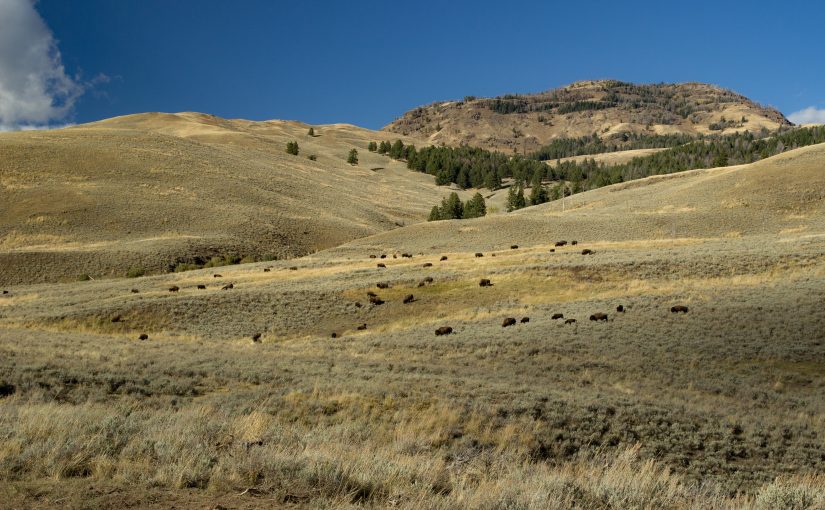 This weekend, I went up to the park with a friend from work. I think she will be deemed my good luck charm from this point forward. 🙂

We camped at Grant Village since my other favorite campsites (Bridge Bay & Canyon) are closed for the season. I wish they didn’t close too soon. The goal was to get up to Lamar Valley at sunrise for a hike and hopefully catch a wolf or two. Turns out only the later happened, and I’m OK with that.

Sort of past the buffalo ranch, I saw Ranger Rick on the side of the road and something standing at the top of the hill. I’m guessing it was a bighorn sheep, coyote, etc. I’m usually in denial until I’m sure what I’m looking at. Sure enough, it was the Lamar Canyon alpha female. She was on the north side of the road while the rest of the pack crossed, and they were howling back and forth. Soon she made a move to cross, but not before moving way up-stream to avoid the crowd.

The behavior that happened after this was interesting. They didn’t join up right away. It even seemed like they were avoiding each other at first, even going so far as passing each other head on. In this image, the alpha female is at the bottom heading to the left and the rest of the pack are above, further away from me heading to the right.

Could they not see each other? I would think that they were aware of each other’s presence. Some other onlookers mentioned that sometimes they are not sure right away if the opposite is friend or foe. Seems kinda weird to me – I know I could recognize my family in a crowd of people.

Whatever the reason, they eventually figured it out, and a dogpile of greetings ensued.

At this point the day was already a win. The hike we had planned was skipped because I wasn’t feeling 100% and it was quite chilly that morning – drove Beartooth Hwy instead.

Had lunch at Red Lodge, and then began the journey back to Jackson. On the way back through the park, there were some bighorn sheep moving through Calcite Springs.

At tower, there was a black bear hanging around the parking lot. I think this might be my favorite black bear picture, mainly because of how well their face looks. Focus through branches? Nailed it! 🙂

Sun was setting and we still had to make it to Jackson. South of Canyon, a grizzly appears in front of the horse corral. There was no way I was going to pull off a shot with my Tamron 150-600 lens, but as I was sitting in my car, he turned and got close…close enough for a 70-200 f/2.8 lens. The rest of the drive back to Jackson was in the dark.