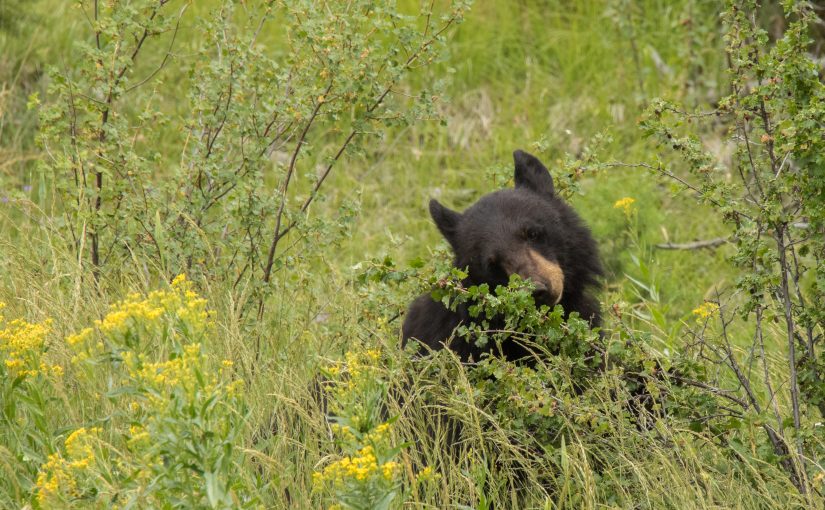 For this weekend outing, I had a couple visitors. Spent less time looking for wildlife and more time hiking / driving around. I realized that I had the patience to wait around for hours waiting for a wolf sighting, but they have much more they have not seen yet.

Left from Victor Saturday morning. Saw this bald eagle at the fishing pond south of town. It’s not in the park, but close enough.

Continued on to GTNP, where we hiked Taggart Lake Trail. Didn’t see anything on Moose-Wilson Road.

After that brief stroll, we continued for our campsite at Bridge Bay. Several landscape shots were had along the way. There was a heron and some pelicans at Oxbow Bend.

Setup camp, had lunch, continued on to Hayden Valley. Pretty quickly found the seemly most consistent bear in the area.

The ranger at the overlook was telling everyone it was a black bear. I have plenty of closer photos of this guy, and I’m pretty sure he’s a grizzly, but when is it ever a good idea to argue with a ranger? I asked him what made him a black bear. He mentioned that the hump was not defined enough and his muzzle looks more like a black bear. I left it at that. I heard later that he changed his mind.

Left to see the falls. The osprey nest at Lower Falls has two chicks in it. Put the scope on it for a closer look. I was also to get a half-decent heavily cropped photo. If you are in the area, this is a good nest to check on.

Back in the valley, the same bear was still out…now more towards Alum Creek.

Got the boys up super early by their standards to get to Hayden Valley by 6ish. No wolf action, so we drove down to Alum Creek. Our favorite relocated bear was there as well as a second grizzly to the north of the road. The grizzly crossed at a predictable spot, causing some tourons to gather quite close. It was obvious the bear was going to cross there, and they got out and approached anyway. This was taken with a telephoto lens which compresses the distance, but you can calculate it using the dotted lines on the road.

Sadly missing the capture of a bear attack on film, we watched the two bears get pretty close on the meadow to the south, but they seemed to ignore each other.

Had breakfast at Canyon and then off to hike Mt Washburn from Dunraven Pass. It’s a great trail for people that haven’t been to the park before in my opinion. There was only a brief bighorn sighting on the way down. It was kinda disappointing considering I lugged my Tamron lens all the way. Oh well.

There was a brief rain on the way down and a bigger storm brewing from the north. This image is from the Chidden Road trailhead.

After the storm passed we continued north. There was a black bear at Calcite Springs, now mid-afternoon.

Back at Hayden Valley for the evening where there was on-and-off rain. At least it made for a nice rainbow.

South of Grizzly Overlook, near Trout Creek I think, there was a bear with 2 cubs. I’m guessing grizzly mainly because I’ve never seen black bear out there. As we were packing up, another bear was spotted down the road. It’s our friend, Mr Relocated Bear making his appearance again.

Weekend is in overtime! Took Monday off for family and friends that were here.

Slept in, went to Norris Geyser Basin, then over to Old Faithful. It’s an unfortunate requirement for people’s first visit to the park. We got there late morning. We didn’t go through the visitor center, figured someone could tell us the predicted time as it was pretty packed. We found a spot, and I didn’t even have time to setup a tripod before it started erupting. Works for me! Saved up to 90 minutes on the day. 🙂

We were all pretty pooped, so we headed out the west entrance, stopped at Wild West Pizzeria (highly recommended) for lunch and headed home.

Dropped them off at Jackson Hole Airport Tuesday morning. Had some time to kill before work, so…pictures. 🙂